The District of Columbia lost the following individuals to violence in the last week:

We are still in the 30-day mourning period for the following individuals lost to violence in the District: 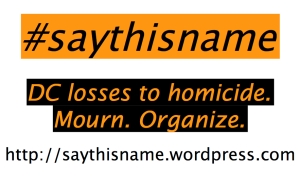 #SayThisName for each person lost.

Data are taken from DC’s Metropolitan Police Department notices. (See “About” for a little more.)

For thoughts on responding from a faith perspective, please visit Song Every Day.

This weekly listing of homicides in the District of Columbia is a meant to help all who care about the city mark each such loss. It cannot replace Homicide Watch DC or conduct investigations but provides a list that individuals, groups, and congregations can use to keep these losses in mind. See also Homicide Tracker: D.C. Witness

See Data Page and About for more on this blog. Subscribe for weekly posts (above) or check back each Thursday...may the list soon be an empty one! Current publication is Thursday mornings. This is meant to facilitate sharing of names through weekly announcements, newsletters, etc., but suggestions -- including schedule alterations -- are welcome.

Suggestions -- including additional resources to share are most welcome.

Victims and primary mourners may not be near neighbors, congregation members, or group participants. Still, let us unite in marking every loss.

Beyond DC: join District residents in marking national capital losses and/or organize a similar list, should need arise, for your own area.